Those Wacky Heterosexuals has been published erratically by B. Allan Ross via UsQueers.com since 1999. Some of those old columns are still available there.

The earliest TWH I could find using the Wayback Machine of the Internet Archive is TWH Oct 17 2000. If you are patient, some of the pictures will load, and you can copy them or try to link to them from your whatever to where the Internet Archive has them permanently stored.

You can find everything The Internet Archive has stored so far from UsQueers.com — publisher of Those Wacky Heterosexuals.

TWH is on its way back, here, there, somewhere, most definitely, presuming no hets take me up on my Lev. 20:13 Challenge! 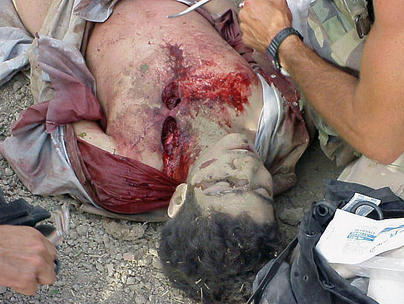 Omar Khadr, 15, a heterosexual child soldier and Canadian citizen, was wounded while being captured by the U.S. military in Afghanistan in July, 2002, then charged with terrorism. The boy was blinded in one eye and shot several times.

His het lawyers claimed statements made by Khadr to his presumed-to-be-heterosexual (during DADTDPDH) U.S. military interrogators were illegally obtained through torture. They asked a heterosexual-dominated U.S. military war crimes court to throw them out.

That request was denied by a U.S. military judge, a practicing heterosexual, at the U.S. military Navy base at Guantanamo Bay, Cuba.

From the Aug 02 2010 Think Progress newsletter, I snagged the little section below, “Under The Radar”, to highlight a couple of “superior qualities” possessed by Those Wacky Heterosexuals out where we can all appreciate and learn from them.

Here’s an update to a story we ran earlier.

Wisconsin Heterosexual Accused of Digging Up Dead Woman for Sex

LANCASTER, Wis. (AP) – An attorney for a 23-year-old openly heterosexual man accused of trying to dig up a dead woman in Cassville to have sex with her says his client only wanted to wanted to pose her in a “non-sexual way.”

In opening statements, defense attorney Suzanne Edwards described Nicholas Grunke as a shy virgin who longed to have a girlfriend. When a 20-year-old woman died in a 2006 motorcycle crash, Edwards says Grunke wanted to “set up a little fairy-tale scenario.”

Prosecutor Tony Pozorski argued that Grunke intended to have sex with the body.

Pozorski argued that Grunke, his twin brother Alexander, and friend Dustin Radke were involved in the alleged scheme. The prosecutor says a van found near the scene contained shovels, a wrecking bar and a box of condoms.

This site uses Akismet to reduce spam. Learn how your comment data is processed.